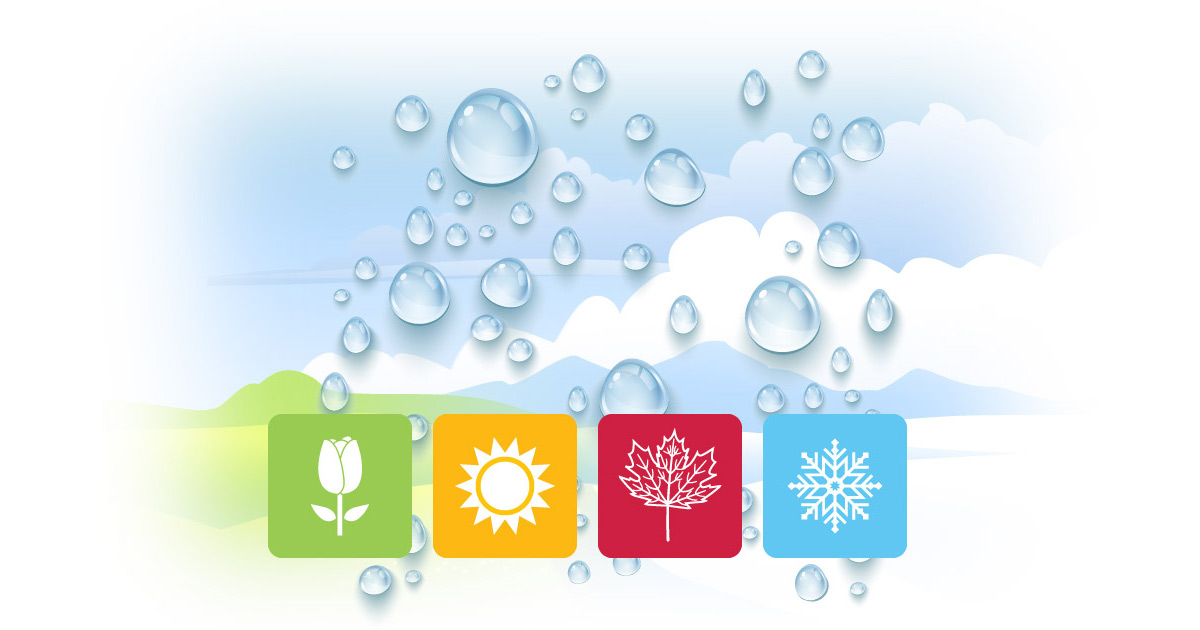 Condensation can form on the inside or outside of a window at any time of the year depending on humidity levels, the temperature, and differing environmental conditions both inside and outside a home.

Most people believe that by buying energy-efficient windows, they will alleviate the problem of condensation, however, the fact is that even the most efficient windows on the market do not create a 100% insulating barrier between the inside and the outside of a home. In fact, windows are still very inefficient (R4) compared to walls (R13).

Your window panes will generally be the coldest or warmest surfaces (depending on the time of year) in any given room because the glass will have direct contact with the outside air. As a result, they are prone to condensation especially as outside and inside temperature differences are extreme.

To understand exactly what’s going on, we need to comprehend the nature of a few important variables and how they are related:

Vapour saturation is a state in which temperature can hold a maximum amount of water vapour (in a gaseous form). The higher the temperature the more water it can hold.

Absolute humidity is the measure of water vapour (moisture) in the air, REGARDLESS of temperature.

Another important factor when looking at window condensation is the difference in temperatures between the inside and outside of a home, there will always be a transference of hot or cold on the window glass.

Extreme hot and cold temperature changes in a short period of time inside or outside the home can result in condensation on the window glass.

If you bring a very cold metal object from outside into the warm environment, the air close to the surface of that object is cooled below the inside environments dew point causing the air around it to condensed leaving water on and around it.

The differing temperatures between the outside and the inside, the window and the moisture in the air all have an effect on causing condensation any time of the year (see some examples below).

The quick cool overnight left lots of dew in the outside air, which was transferred to the exterior of the window. If the following day is sunny and warm, the exterior fogginess on the window will disappear quickly. Energy-efficient windows in this scenario may not make much of a difference, condensation in the form of dew will be everywhere.

Typically, this will result in very mild fogging if any, on the exterior of the window. Again, the more efficient the insulating properties of the window, the lesser the amount of fogging on the outside of the window.

The quick overnight cooling temperatures left lots of dew in the outside air, which was transferred to the exterior of the window. If the following day is sunny and warm, the exterior fogginess on the window will disappear quickly. Energy-efficient windows in this scenario may not make much of a difference, condensation in the form of dew will be everywhere.

Outside condensation means your windows are not allowing any heat transfer.

While interior condensation is usually the result of shower steam or stove pots, it can indicate high levels of humidity levels in your home. 60% humidity, as in our example above is an extremely high humidity to have in a house at any time of the year.

Excessive moisture in a house can be very damaging to your home and to your family’s health.

If you would like more information about condensation and problems associated with condensation. We’d be happy to address all of your questions or concerns. Contact Us.